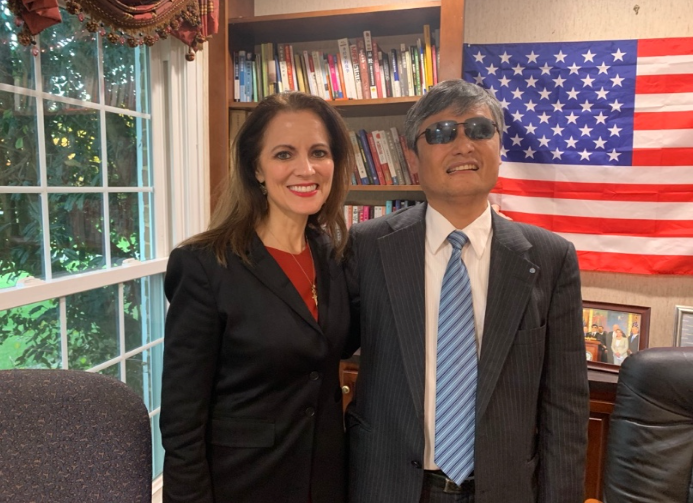 Recently I was honored to interview Chen Guangchen, the Chinese dissident, also known for his memoir The Barefoot Lawyer: A Blind Man’s Fight fo Justice and Freedom in China, which happens to be the best memoir I have ever read. To listen to the interview from someone who has suffered firsthand the brutality of the Chinese Communist Party, click here starting at minute 37:30.

Guangchen is currently a Distinguished Fellow for the Center for Human Rights at Catholic University of America. He is a Chinese civil rights lawyer and activist who has been a persistent voice for freedom, human dignity, and the rule of law in his native country. Working in rural communities in China, where he was known as the “barefoot lawyer,” Chen advocated for the rights of disabled people, and organized class-action litigation against the government’s violent enforcement of its one-child policy. Blind since his childhood, Chen is self-taught in the law. His human rights activism resulted in his imprisonment by the Chinese government for four years, beginning in 2006; after his release he remained under house arrest, until his courageous and miraculous escape by himself from confinement in 2012, whereupon he the United States assisted to receive him and his family. He became a scholar at New York University in 2012-13. In March 2015, his autobiography The Barefoot Lawyer: A Blind Man’s Fight for Justice and Freedom in China was published.

His imprisonment and house arrest, from which he miraculously escaped was called “one of the most gripping stories in recent Chinese memory” by the Wall Street Journal. While in prison“[t]he CCP pressured me to confess to crimes I did not commit, had inmates beat me… [t]hey beat my lawyers…and [u]nder house arrest, they moved into our house to abuse us 24 hours a day,” recounted Mr. Chen in the interview above.

About his book, Batman actor Christian Bale says, “Think Huckleberry Finn growing up to be Atticus Finch. In this brave and undaunted book, Guangcheng proves himself the very best kind of trouble-maker. He fights monsters. Monsters who hide behind officialdom and party uniforms. Monsters of lazy sadism who flaunt the rule of law and violently oppose any chance for human dignity. A gritty and insanely inspiring story of a man who has been through Hell and come out smiling… Tyrants beware.”

Having lived through China’s brutal repression and endured first hand their cruelty throughout his life, Guangcheng said “I have long said the Chinese Communist Party is a threat to humanity.  Now, with the outbreak spreading from Wuhan to the far reaches of the globe, the regime has again proved itself a danger to civilization.”

Guangcheng and his family now live in the United States.

Free Speech is a Constitutional Right